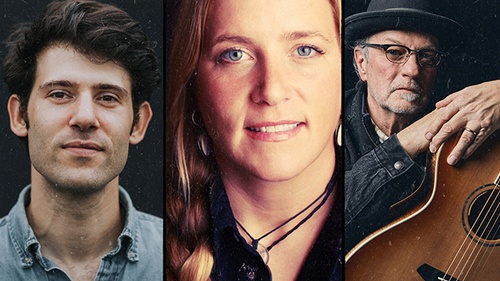 Songwiter’s rounds are a staple in music cities across the country. The Roaring Fork Valley has no shortage of talented songwriters with talented friends from afar. Join us for the first TACAW Songwriter’s Round where participants will take turns playing a song and chatting about process and inspiration.

This edition is hosted by Jackson Emmer and features Susan Gibson and David Starr.

Jackson Emmer is an award-winning singer, songwriter, and producer from Carbondale, Colorado. His work blends humor with heartache, and tradition with exploration. Emmer’s writing is often compared to that of John Prine and Guy Clark. He has toured the US since 2009, collaborated with Grammy-winners, and received grants & awards for his music in Texas and Colorado.

Susan Gibson is a Wimberley, Texas-based singer and songwriter who has released six solo albums and tours the nation. Gibson was the lead singer for the alternative country band, The Groobees, and is the writer of the Dixie Chicks hit “Wide Open Spaces”.

David Starr possesses “a compelling voice, something truly special, both accessible and passionate” (Elmore), that has been honed releasing nine albums, touring internationally, and opening shows for esteemed artists such as John Oates (Hall & Oates), Karla Bonoff, The Steel Wheels, Survivor, and more.

Starr’s prestige extends beyond the stage as well, having launched Starr’s Guitars in Little Rock in 1998, then relocating to Cedaredge in 2001. Today, the store is such an institution that Cedaredge proclaimed the musician’s birthday as David Starr Day in 2016. Starr was also instrumental in the 2018 opening of the Grand Mesa Arts Center, an intimate event space brought to fruition through strong community support in Cedaredge, CO. He helped design the space in order to attract musicians and visual artists to Southwestern Colorado.