Beginning July 9, and continuing every second and fourth Saturday through September 10, six feature films will be shown in Lions Park on a 16-foot inflatable screen with four Eurolive outdoor speakers at each corner.

Gates open at 7pm for a pre-movie community picnic and the movies will start after sunset.

Bring picnic baskets or try scrumptious snacks from the Munch LLC and other food trucks and venders. Folding chairs, blankets, small umbrellas, flashlights and maybe a jacket are recommended. Costumes are encouraged.

* BEER, WINE & REFRESHMENTS WILL BE AVAILABLE FOR PURCHASE AT THE EVENT. NO ALCOHOLIC BEVERAGES MAY BE BROUGHT INTO THE PARK **

"Movies have the great power to bring people together," said Thompson, who grew up in Basalt and is now a film editor. "We hope lots of people will come out to enjoy movies under the stars and be part of the future planning."

The Outdoor Movie System includes a high-definition projector and Blu-Ray wifi-capable player. The planning team is reaching out local schools, the library and entertainers to share the stage. Future movies will be held in the new Triangle Park at Willits and other community locations.

Additional sponsors are needed to support the ongoing production and fund future movies. Top level sponsors are recognized in the pre-movie features and video advertising opportunities are available.

For information on sponsorship and supporting future events contact director@basaltchamber.com

Presented by the Basalt Chamber of Commerce, a not-for-profit, 501(c)6, organization of business and professional men and women, was established in 1983 to promote the economic and civic well-being of Basalt and the surrounding community. Working with a small staff, volunteer board and committees, the Chamber supports nearly 500 members and serves as a catalyst for business growth, encouraging entrepreneurship, cultivating business alliances and fostering economic opportunity.
------------------------------------------------
2016 Basalt Summer Cinema Series: Movies in the Park

The Princess Bride 1987 Rated PG
A fairy tale adventure about a beautiful young woman and her one true love. He must find her after a long separation and save her. They must battle the evils of the mythical kingdom of Florin to be reunited with each other. Based on the William Goldman novel "The Princess Bride" which earned its own loyal audience.

The Rocky Horror Picture Show 1975 Rated: R
In this cult classic, sweethearts Brad (Barry Bostwick) and Janet (Susan Sarandon), stuck with a flat tire during a storm, discover the eerie mansion of Dr. Frank-N-Furter (Tim Curry), a transvestite scientist. As their innocence is lost, Brad and Janet meet a houseful of wild characters, including a rocking biker (Meat Loaf) and a creepy butler (Richard O'Brien). Through elaborate dances and rock songs, Frank-N-Furter unveils his latest creation: a muscular man named "Rocky."

Local Hero 1983 Rated: PG
Up-and-coming Houston oil executive "Mac" MacIntyre (Peter Riegert) gets more than he bargained for when a seemingly simple business trip to Scotland changes his outlook on life. Sent by his colorful boss (Burt Lancaster) to the small village of Ferness, Mac is looking to quickly buy out the townspeople so his company can build a new refinery. But after a taste of country life Mac begins to question whether he is on the right side of this transaction.
**100% thumbs up at Rotten Tomatoes

Dirty Dancing 1987 Rated: PG-13
Baby (Jennifer Grey) is one listless summer away from the Peace Corps. Hoping to enjoy her youth while it lasts, she's disappointed when her summer plans deposit her at a sleepy resort in the Catskills with her parents. Her luck turns around, however, when the resort's dance instructor, Johnny (Patrick Swayze), enlists Baby as his new partner, and the two fall in love. Baby's father forbids her from seeing Johnny, but she's determined to help him perform the last big dance of the summer.

Labyrinth 1986 Rated: PG
A 1986 British-American adventure musical fantasy film directed by Jim Henson, executive produced by George Lucas, and based upon conceptual designs by Brian Froud. The film revolves around 16-year-old Sarah's (Jennifer Connelly) quest to reach the center of an enormous otherworldly maze to rescue her infant brother Toby, who has been kidnapped by Jareth, the Goblin King (David Bowie). With the exception of Bowie and Connelly, most of the significant characters in the film are played by puppets produced by Jim Henson's Creature Shop.

Purple Rain 1984 Rating: R
A victim of his own anger, the Kid (Prince) is a Minneapolis musician on the rise with his band, the Revolution, escaping a tumultuous home life through music. While trying to avoid making the same mistakes as his truculent father (Clarence Williams III), the Kid navigates the club scene and a rocky relationship with a captivating singer, Apollonia (Apollonia Kotero). But another musician, Morris (Morris Day), looks to steal the Kid's spotlight -- and his girl. 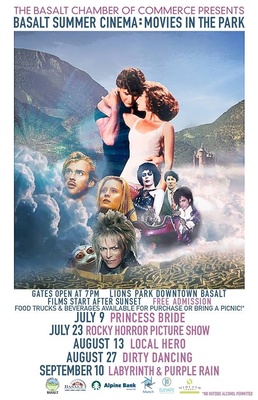